Rapper Young Thug, real name Jeffery Williams, 30, and Young Stoner Life artist Gunna, real name Sergio Kitchens, 28, seem to be having a pretty active week. Gunna has been in high demand with the recent release of his latest album, DS4EVER, which debuted with the No. 2 spot on the Billboard 200 chart. The two had recently boarded a private jet with a few friends to perform in New York.

However, the flight was cut short after those aboard were reportedly kicked off the private jet. This sudden removal happened after a flight attendant told the pilot that members of the group were disrespecting her.

The story comes from Instagram lives posted by the rappers, as they discussed their grievances to the flight crew and the police, who were called to escort the group off of the plane after refusing to do so.

Gunna is seen on his Instagram live recording the situation around him, telling his followers.

Young Thug also took to Instagram live in an almost 35-minute video of the situation. He begins his life getting out of the plane, stating

“We had a show in New York tonight, but we got racist people flying us. They said that we disrespected them-we haven’t disrespected them at all. So, now they’re [trying to] kick us off the plans and make us miss the show, and we haven’t done anything.”

The rappers believe that the flight incident is a result of racial discrimination from the seemingly, all-white flight crew. Young Thug recalls the conversation with his followers as the two parties discuss the situation with the police. According to Young Thug, he asked the pilot

To which the pilot responded

“Oh you disrespected my colleague.”

Young Thug then asked the pilot

“How did we disrespect one of your colleague? Tell us. What did we do?”

To which the pilot allegedly answered

The rapper then proceeded to call the pilot a “racist prick” for his alleged, lack of reasoning for kicking the men off of the plane.

Young Thug got kicked off the private jet with Gunna and walked up to the pilot n told him he wasn’t ?? . ??????? pic.twitter.com/AmTxsTT0YV

When the officers ask Young Thug for his side, he explained to the cop:

He then explained that the pilot initially told the rappers that he was mad because one of their friends didn’t have an ID card on them, which the pilot allegedly stated: “ticked him off.” The undisclosed friend is said to have quietly left the plane after being told that he could not fly without an ID on him.

The rappers, who were on their way to do a $500 thousand show in New York, were adamant about being able to get to the city, as Young Thug stated to the police:

“You have to do what you need to do, man. At the end of the day, if [the pilot] says he’s not gonna fly, then that’s on the company that represents him”

To which Young Thug responded

“Alright, but [him not flying] is equivalent to us saying we’re not getting off the plane. So who’s got the say so? Because we paid for the plane, [the pilot is] just flying.”

He then explained to the officer that the pilot told them that they were not getting their $40 thousand dollars back, even though they refused to fly them.

Rapper and friend Drake, real name Aubrey Graham, 35, commented on Young Thug’s Instagram live to rectify the situation by offering to send the men a new plane. The rapper wrote

Gunna then took to Instagram to post “Alex ain’t P.” Alex, assumedly being the name of the pilot. 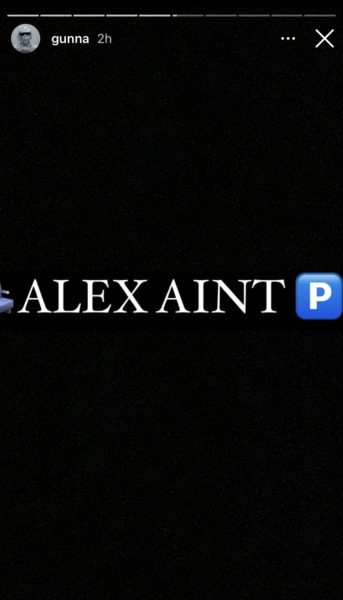 There is no current evidence confirming the allegations made from either the flight crew or Young Thug and Gunna, nor any information on how the ruckus was rectified.

Do you believe the situation was racially motivated? Comment down below.