It takes a strong person to revisit their past. When Tami Roman agreed to rejoin her The Real World castmates for an onscreen reunion nearly three decades after their season aired, she was determined to get closure.

The Real World Homecoming: Los Angeles — a revival series for the original 1993 cast — reunited Roman, Beth Anthony, Irene Berrera-Kearns, Jon Brennan, David Edwards, Glen Naessens, and Beth Stolarczyk so they could once again “stop being polite and start getting real” about their unresolved issues. This time around, Roman had a better idea of what she was getting herself into and stuck to addressing the issue she felt she deserved an apology.

“I figured if I’m going to leave the genre or at least an ensemble setting within the genre, then why not go back and finish what I started?”

Fans of The Real World might think Edwards was the last person Roman would want to see in the house, given their history with the blanket incident, but turns out, she actually wouldn’t do the reunion without him. “I felt like over these past 30 years that an apology was warranted for the part I played in that moment,” she told POPSUGAR exclusively. “And I wanted to be able to give him that.”

Though giving — and getting — an apology for one of the most famous moments in reality TV was her main objective, Roman still found it hard to be a willing participant in the reunion all these years later. “It was a difficult decision for me to go back into the house because I felt like I had overstayed my time in reality TV, but [The] Real World is where I started,” she said. “I figured if I’m going to leave the genre or at least an ensemble setting within the genre, then why not go back and finish what I started?”

Leaving the Los Angeles house back in the ’90s brought a lot of change for Roman. She’s starred on several TV shows — including Basketball Wives, The Ms. Pat Show, The Family Business, and Truth Be Told — created her own platform called Bonnet Chronicles, and launched other fruitful ventures. She even uses her YouTube channel to review each episode of The Real World Homecoming: Los Angeles for her fans. But coming back to The Real World gave her a full-circle moment to reflect on how much she’s grown.

“I think that I have a completely different mindset [now],” she shared. “A lot of the experiences that we went through in the house, maybe some of those circumstances, I would’ve done differently. Because as you get older, of course, you gain wisdom. Even if people thought I was outspoken then, I’m even more outspoken now and just trying to diligently be the best me that I can be at all times.” She added that reality TV acted as a mirror that showed her how she handled certain situations. “Naturally, as an individual, you’ll incorporate more of what you like and change what you don’t,” Roman said.

Roman’s reluctant return to The Real World gave her the opportunity to resurrect conversations she bravely spearheaded as a 22-year-old woman in the ’90s, including abortion, women’s rights, body image, and race. And though many would expect these discussions to receive more support this time around, Roman is still the lone voice speaking up first.

One of the most explosive moments from the revival is the race conversation that went wildly viral. During episode six, Black Lives Matter becomes the topic of discussion, and Roman finds herself being the only Black person — despite Edward’s presence — pushing back against Brennan’s “young, Black, colored people” comment, as well as Naessen’s and Berrera-Kearns’s blatant use of the N-word. “With my [Latinx] brothers and sisters, it’s certain slang and sh*t people say that I would never say about y’all,” Roman says in the episode. “And I feel like I should be afforded the same courtesy.”

Roman didn’t think the conversation would take such a sharp turn, especially in 2021 — a year after mass Black Lives Matter protests took place across the country. “I did not think that I would have to educate people, grown people in particular, in their 50s on how to be a decent human being,” Roman said. She even noted how “challenging” it was being the “only person speaking up” about the N-word being used so freely by non-Black people — and on TV at that. 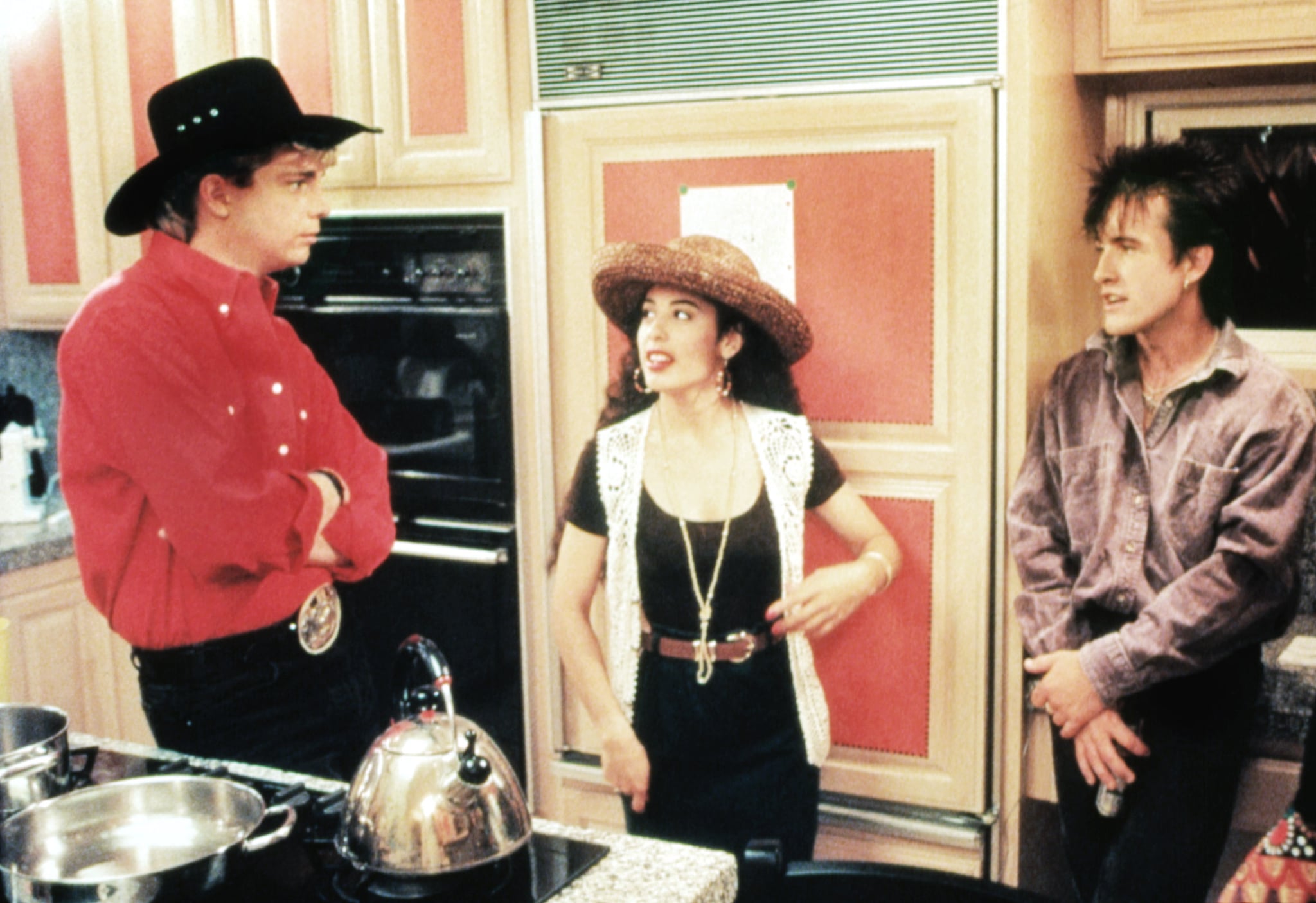 It was one thing for the situation to go awry on screen, but the social media uproar poured even more gasoline on the fire. “I had no idea they were going to go viral,” Roman said. “I was surprised [at the viral reaction], but I wasn’t surprised at the response that came with the [clips] and people absolutely agreeing with my stance on things. I feel like if you were bold enough to set yourself up to be a target based on your beliefs and the things that come out of your mouth, then you’re going to accept this viral moment.”

After the episode premiered on Paramount+, Roman said she received several texts from her castmates — including Naessens, Brennan, Stolarczyk, and Anthony. “I got a text from Glen, who was very apologetic, saying that he welcomed the conversation,” Roman shared. “He wasn’t trying to offend or hurt anybody. He was just trying to tell his story, and he didn’t understand how telling that story in that way would affect me and so many other people. And for that, he apologized.” However, Roman said the apologies she did receive “lack[ed] accountability.” She would’ve liked her castmates to explicitly say they’ll never repeat those words again. “I didn’t feel frustrated, but I also didn’t feel vindicated either,” she shared. “For me, it’s like, I feel you’re apologizing . . . but what are you apologizing for? That’s what I felt was missing in both texts.”

Roman wouldn’t change a single thing about her time back in the house. She even wishes viewers could see more footage that didn’t make the cut so her perspective could be better understood. “I feel like I’m a person who always stands on my convictions,” she shared. “And when you talk about race relations, racial insensitivity, [and] racial inequality in this country, I’m never going to back down from that conversation. I felt it was something that needed to be had, and since I was the only one that was going to say it, I was going to take on that responsibility.” The fallout from the heated discussion also allowed Roman to make peace with the fact that Edwards didn’t back her up as another fellow Black person in the house. “Although I would’ve liked for it to be a different turnout,” she said, “I believe his life is going to go on and my life is going to go, and never the two shall meet, and we will both be okay with that.”

“I think the entire premise of The Real World Homecoming is so that people can understand that as time continues on, we as individuals often go with it.”

Overall, Roman has no regrets about her time back in the house. “I could have done without it,” she does admit. “I’m not going to say I regret it because I do feel like there were some benefits in going through the experience again,” she said. “At the end of the day, I did get to sit down with David and get a greater understanding of what he went through after he was ousted from the house. I was able to apologize for allowing certain words to be used in association with him, as well as being a part of the process for him to be removed from the house, and it didn’t necessarily have to go that way. So I was thankful that I was able to do that again, because I’ve done it before, but I wanted to make sure that everybody knew that I was apologetic.”

For Roman, the saving grace from the show is finally moving on, knowing she can shut the door on this part of her life. And in doing so, she gives something back to viewers: a lesson in making mistakes and being wise enough to learn from them.

“I think the entire premise of The Real World Homecoming is so that people can understand that as time continues on, we as individuals often go with it,” she said. “So the blessing with having these conversations again is that you will see the evolution of how people have learned . . . and come to a level of maturity and understanding that, hey, everybody’s not going to agree . . . I think those teachable moments are something that you often don’t find on other reality shows, but I think that The Real World does it well in putting people in circumstances where you can really see [them].”