Shannon Beador is sharing new details regarding the recent drug allegations she made against her Real Housewives of Orange County co-star, Braunwyn Windham-Burke.

After a rumor began swirling which claimed Braunwyn had offered Stella cocaine when she was just 14-years-old, Shannon denied the report on her Instagram page before alleging the “good stuff” Braunwyn was referring to was indeed another drug and reacting to recent statements made by Braunwyn’s husband, Sean Burke.

“At least you’ve got not offering cocaine to a 14-year-old going for you,” a fan had written on January 21.

“No one was ever offered cocaine…,” Shannon replied.

Although Shannon seemed confident that her RHOC cast mate was not offering her teen cocaine, she once again confirmed her allegation that Braunwyn did offer Stella “drugs” of some kind.

“Why did you keep hanging out with Braunwyn after she offered your daughter drugs?” the person wondered.

“I didn’t find out until a long time after it happened,” Shannon replied, offering no denial regarding the drug claims.

“Stella didn’t want to appear like a ‘tattle tale.’ Had I known when it happened, things would have transpired differently. I talked through it with Stella and didn’t want to interfere with Braunwyn’s sobriety,” she continued.

As for what made her decide to call Braunwyn out at the reunion, Shannon said it was Braunwyn’s own claims against her that forced her to clap back.

“After being called a liar and an alcoholic, she needed to hear and take responsibility for what she did,” Shannon proclaimed. 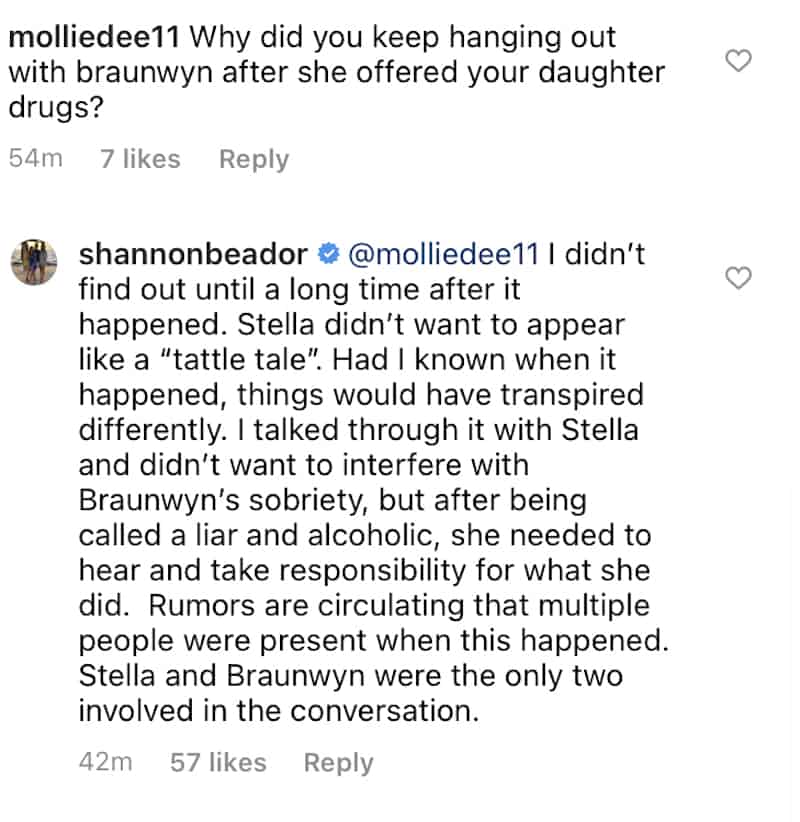 At the end of Shannon’s comment, she told the fan that the suggestion that “multiple people were present” when the conversation occurred was a rumor.

“Stella and Braunwyn were the only two involved in the conversation,” she confirmed.

As RHOC fans may have seen, Braunwyn’s husband, Sean, said in a private message on Instagram earlier this week that the cocaine rumors about his wife were “sick” and “disgusting.”

“I was there, and there was something said in front of all of us, but it was not like that at all,” he alleged.

Also on Instagram, Shannon explained the changes fans noticed in her face at the reunion. According to Shannon, she tried a natural filler on her face prior to the taping that didn’t work. So, in an effort to get something done fast, she opted to get another filler in her face and cheeks that stimulates the growth of collagen.

“I was running out of time so I said, ‘Go ahead and do it,’ without doing the research and without thinking it through, which I usually do. It’s been a hard month,” she shared. “I’m blessed to have the support of my boyfriend and kids who say, ‘Oh, it’s okay. You don’t look that bad.’ But I’m having a difficult time looking in the mirror because I don’t recognize myself.”

Following the ordeal, Shannon sought the help of another aesthetician, who she hopes can tone down her cheeks and make her look like herself again.

The second half of the Real Housewives of Orange County season 15 reunion airs next Wednesday, January 27, at 9/8c on Bravo.

‘Big Brother 23’: Frenchie Says His Chaotic Reign Was Part of the Plan (Exclusive)