Rome & Duddy Embrace The Escapism Of Their ‘Lahaina’ Video


After a year full of sunless days and drab nights, supergroup Rome & Duddy have unleashed ‘mind a thousand colorful words and pictures’ in their new video, and they talk EXCLUSIVELY with HL about ‘Lahaina.’

Very few bands would put out a Loggins & Messina cover in 2021, but very few bands have the bold creative direction and unmistakable charm of Rome & Duddy. The group — featuring Dustin “Duddy” Bushnell of Dirty Heads and Rome Ramirez of Subline with Rome – have made a first impression for a second time, following up last year’s “And It Stoned Me” with “Lahaina,” a version of the song that opened up  Kenny Loggins and Jim Messina’s third album, 1973’s Full Sail. In “Lahaina,” Rome & Duddy transport the listener away from the trials, troubles, and tribulations of the last twelve months, replacing it with a rum-kissed sunny jam full of sun and sand.

“The video was just sending out the mindset of Lahaina,” Rome – along with Duddy — told HollywoodLife in an EXCLUSIVE interview. “I know we’re all locked down right now, so let’s tap into some escapism and close your eyes and pretend you’re in f-cking Hawaii. That was our MO. We were very lucky to be out in the Isle of Palms. The population’s like 50, and we were just out there with our buddies and people who have a really nice house and a studio and wanted to play music with us. We brought my brother. He does a lot of our videos, and he’s like, ‘Hey, man. Let’s go shoot a video today. It seems like a beautiful day.’”

That spontaneity and carefree attitude matched perfectly with the new song, a track about getting away from the grind of everyday life (a message that seems more poignant than ever.) “For us, we just put our heads together and tried to utilize what we had, which I think is the fun-ness of the project as well,” added Rome. “It’s not so much like we think of this idea, and then we have to hop on three conference calls with the f-cking label and go through all this sh-t. Then it gets a budget, and then the whole idea gets canned anyway.”

“With ‘Lahaina’… the reason we decided to put that song out was because it really embodies where we’re trying to take this project, and that, you know, words can only do it so much justice,” said Rome. “You need to hear something. It can bring to mind a thousand colorful words and pictures. That’s what that song did for us when we first heard it. It created a whole vibe for us that inspired this whole wave of music that we’re doing now, and we thought the same way, like, ‘You know what? If it did that to us, I’m sure it’ll do the same thing to the people when they hear it, especially our fans.’”

“I’m really glad, when you heard that song, you [experienced] the feelings of escapism,” added Rome, “because that’s exactly where we’re trying to go with the project is kind of like a Jimmy Buffett [via] So Cal, you know? That’s our moral compass, and then just trying to write some really classic, timeless music.”

Helping Rome & Duddy construct this magical island oasis is none other than Jim Messina himself. The music icon – he was part of Buffalo Springfield, a founding member of country-rock band Poco, and highly respected solo artist – joined in on the track and had a special cameo in the video. “Yeah, that was pretty magical when we found out that he was actually going to get on the song with us,” Duddy told HollywoodLife. “It was funny in some ways that that song came about because Loggins and Messina was one of the bands we were listening to.”

“We made a list of all of the bands that like, ‘Hey, let’s look into this stuff to get the vibe right for writing this new album.’ We booked a cabin up in the mountains, and when we got there, we turned on the radio,” said the Dirty Heads singer “That song,’ Lahaina,’ was the one that came on it. It just set us in such a good mood, and it was such a good vibe right off the bat that when we started talking about doing a cover, let’s just do the Lahaina song.”

“It’s such like a classic rock lick,” added Rome. “You know what I mean? Everyone else is trying to get like a Travis Scott feature, and we’re just like, ‘Dude, let’s just go to these rock stars and hit them up.” We tried with Van Morrison, but that was a little too high.” “He don’t do stuff like that,” said Duddy, with a laugh.

“But Jim’s a great, great dude,” continued Rome. “He worked in the studio with us. He also helped produce the record. He invited us over to his house and stuff. Duddy wasn’t able to make it, but I went down and sat with him and his wife. He made us some rigatoni, and we just talked about the song. He was just as every bit surprised that we covered that song as anybody else, because even for him, he was just like, “Out of all songs in our catalog, why that one? It’s such a random song.” We were like, “I don’t know, man.” The heart wants what it wants. I think, too, out of a lot of their songs, that one lends itself to our vibe. I felt like we were able to tell. We can really do this one justice.”

Though their first two songs were covers – “And It Stoned Me” was done by the aforementioned Van Morrison – Rome & Duddy is not a cover band. Like a pair of guiding stars shining over the Caribbean, these two tracks are meant to guide fans’ expectations, leading them unto paradise. “We’re trying to –until we put out our original songs and our full album — we were trying to do covers, just getting the fans excited, and for us, it’s fun as well,” said Duddy.

“Yeah, we’ve been working in the studio for the last year, just perfecting the writing,” said Rome. “We didn’t really go in on recording or anything like that, but we just went in and got some really solid demos of about a dozen songs that were. We’re going to make an album out of them. It’s a little bit different from our band. I mean, it is different from our band, but it’s not too different, but it’s definitely something that is it’s a new sound for both of us. For us to really feel comfortable, we really had to really love the music, and we do now. We really got some amazing music, and I’m excited about it.” 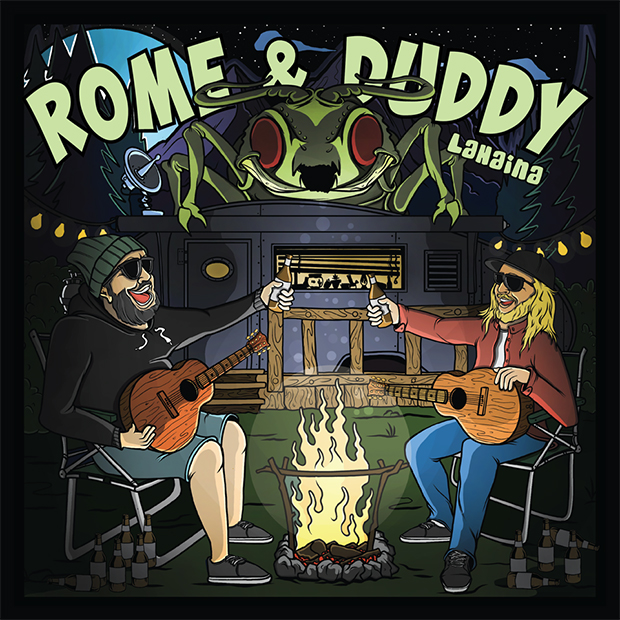 They’re also excited to share some of the surprises on their upcoming album. “We’re trying to work out something with,” says Rome after asked if there were any other “bucket list” musicians he and Duddy wanted to collaborate with. “Honestly, there are two or three people that are just legendary guys that we love that have collectively probably sold a trillion records, but they’re just legends that are sitting around, living off their royalties. We’re like, Dude, can we play with you?’ We have some stuff in the works, and as the album rolls out, you’ll see some of these features popularize or materialize, but as of right now, we can’t really let the cat out of the bag.”

After a year in lockdown and quarantine, Rome & Duddy’s “Lahaina” might just be signaling a new wave about to hit music, one of parties, freedom, and escape from the grim reality of the last year. “I think a lot of the music that’s going to come out, obviously, in the near future is going to be music that was written during this pandemic,” said Duddy. The Dirty Heads singer thinks that the next wave of music will either follow “Lahaina” and be about living the good life or “it’s going to be like angst music, like ‘I’m trapped in the house. F-ck the government. F-ck everyone.’ Y’know? The whole gamut.”

“Everyone will be satisfied. You want some really angry-ass music, you’re probably going to get it,” added Rome. “If you want some really chill, low-fi stuff, like ‘glad to be back out in the world,’ you’re going to get a lot of that, too. There’s definitely a reappearing theme in our album. It’s definitely focused on this optimism, and honestly, it’s like feeling good. That’s the whole MO for the album. We weren’t really trying to write an album like that, but that was just our mindset because we were just so sick and tired of watching the news and hearing about all this crap that by the time we got to the studio, the last thing we wanted to do was write about that sh-t.” Cheers to that.

This interview has been edited for clarity.

Too Hot to Handle: Follow the Season 2 Cast on Social Media