The two have been dodging rumors of a split since December 2020 when the two suddenly stopped appearing on Married at First Sight’s spinoff show, Couples Cam. The couple dropped off the radar as they left the show and stopped posting pictures of each other on their social media pages. This caused fans to wonder, what happened?

While Bennett continued to be in the public eye, he carefully avoided questions regarding his marital status. Amelia went off the grid completely with no social media posts or interviews given.

When she did finally return to social media, her first post back featured no news on her relationship with Bennett despite fans’ ongoing questions.

Things were not looking good for the couple, yet no divorce document had been filed… until now.

Bennett initiated the divorce proceedings with Amelia, filing with the City of Richmond, as that is where Amelia currently resides. 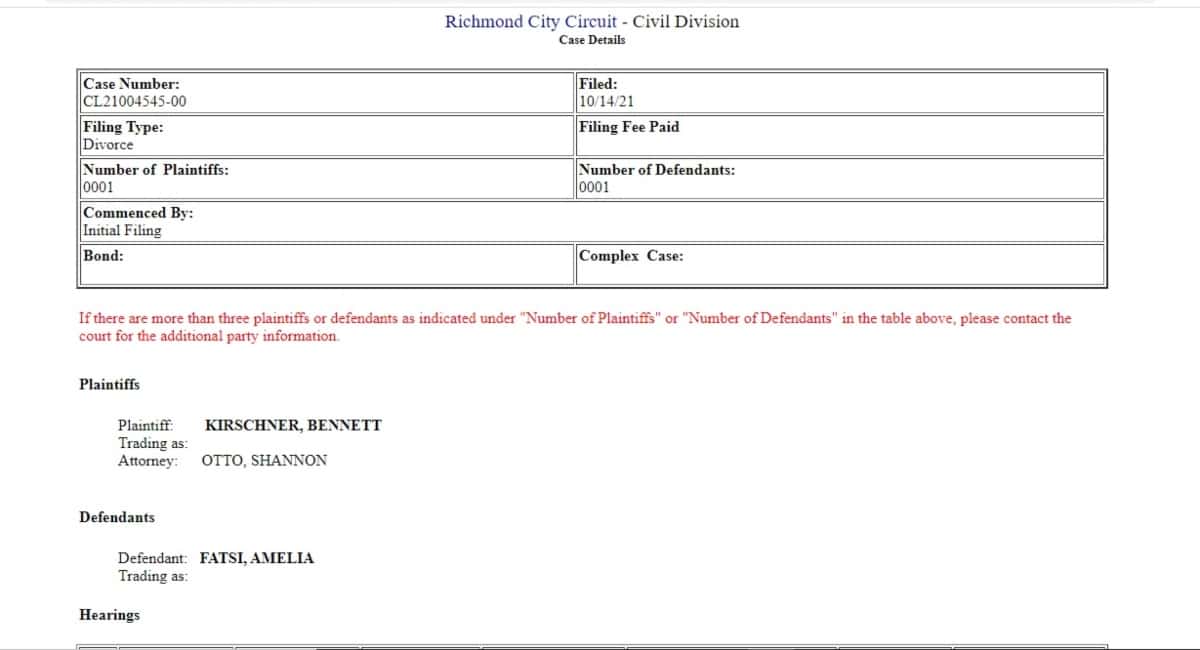 Amelia, a doctor entering into her residency, was going to have to move from the couple’s then-home city of New Orleans all the way to Virginia. The topic was a bit of a point of contention for the two on the show, but they eventually reached an agreement.

But it seems things did not go as smoothly as the two had planned. Shortly after the move, the couple seemed to drift apart and viewers heard nothing from the once fan-favorite. And in this case, no news was not good news.

Amelia and Bennett met and married on MAFS season 11 in New Orleans, and they immediately won fans’ hearts. As Amelia strode down the aisle with a unique dress, stockings, and feathers adorning her hair, fans knew she was not like the other brides. But luckily for her, Bennett turned out to be just as quirky as she was, and the two hit it off immediately.

Fans were thrilled the two stayed together past Decision Day, and they even made a short appearance on the show’s Couples Cam spinoff, which features the successful MAFS spouses in their daily lives.

But their cameo on the show and their marriage were both short-lived as the two have since filed for a divorce after less than one year of marriage.

Despite the season being filmed during the pandemic, Bennett and Amelia had made couple number three of their season to stay together. This is the highest success rate MAFS has seen in a while, compared to season 12’s one couple success rate and season 10’s disasters that also left one couple standing. With Amelia and Bennett’s divorce filing, their season’s couple count is down to two.

Neither spouse has posted anything to their social media about the split or made a public announcement. In fact, one of Amelia’s most recent posts features her in a sexy yoga pose with a mystery man whose identity was never revealed.

But now that the news of the divorce is out of the bag, maybe both former spouses’ lips will become a little less sealed and they will share details of their split and potential new partners.

It’s always sad to see a Married at First Sight couple not make it to the marriage finish line, but with this loveable pair, we are quite sure they will be able to find new partners in no time.

Porsha Williams Says She & Simon Guobadia Don’t Have A Wedding Date, Reacts To His Family Having Multiple Wives