After Madison’s co-star, Craig Conover, accused her of sleeping with a married MLB player during the two-part reunion special for season seven, Kaci responded to the reports regarding the mystery man’s identity on Instagram.

After Craig shared a clip of his confrontation with Madison days ago, Entertainment Tonight’s Brice Sander wanted to know more about his allegations against her.

Then, after another person on Instagram suggested it was “ARod,” Kaci weighed in.

“ARod’s not married!” she replied.

While some fans felt Madison’s sister had denied her alleged affair with Alex, the Best of Bravo fanpage on Instagram pointed out that Kaci didn’t actually deny anything, aside from ARod’s marital status.

“Just to point something out here – she didn’t say ‘no,’ all she said was ARod’s not married, which is true lol,” the page explained, giving a nod to the fact that ARod is currently engaged to Jennifer Lopez. 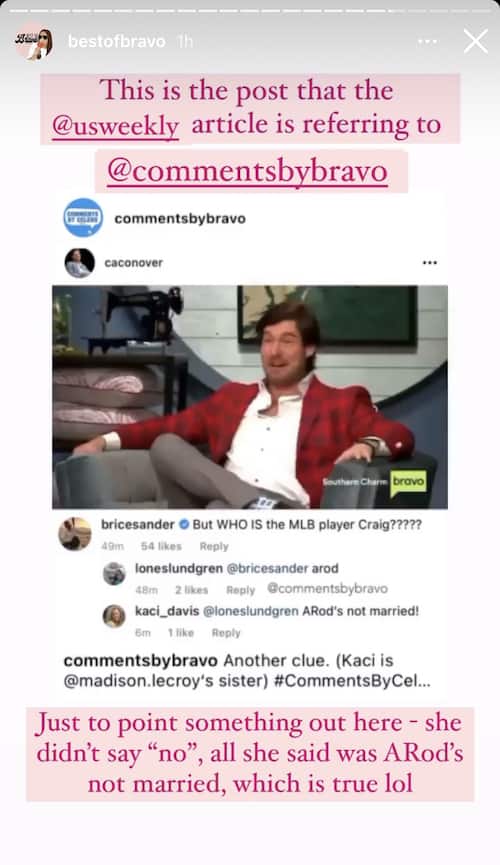 During the Southern Charm reunion, Craig accused Madison of “flying around the country sleeping with married men, ex-MLB players,” during quarantine.

“You know why [Austen Kroll] was at my house?” Craig asked. “Because you weren’t talking to him. You flew to Miami to f*ck an ex-MLB player. That’s what you were doing during quarantine.”

When Andy Cohen then confirmed that the ex-MLB star was “very famous” and “married,” he asked Madison about their supposed interaction.

“Is this someone that you have DMed with?” Andy said.

“He contacted me. And yes, we DMed,” Madison replied. “But other than that, there was nothing. I’ve never physically seen him, touched him. I am not a f*cking liar and I will stand up for that.”

The second half of the Southern Charm season seven reunion airs Thursday, February 4, at 9 p.m. on Bravo.