Amelia, 19, took to Instagram on Tuesday to show off her model figure while wearing white lingerie. The 19-year-old was likely paid for modeling the dainty lingerie in the photos as she shouted out the company and included an “ad” hashtag.

“Easy to practice self love in my [Boux Avenue] designed in London,” she captioned the post, which was also reported by The Sun.

In two of the photos Amelia is seen showing off her petite figure on a couch while posing on her knees and whipping her hair around and she’s lying on a chair in a third pic.

Of course, the stunning model received a great deal of praise with heart and fire emojis from fans, including her own mom, who is also not shy about showing some skin.

Lisa responded to the post with three white heart emojis and one fan was “disgusted” by the actress’ response.

“[WTF] is wrong [with you]? [You] like what you see? [Disgusting],” the person commented, along with three cursing emojis.

Lisa didn’t waste any time and quickly defended her praise of her “child’s” pics, writing, “What is wrong with you? This is my child.” 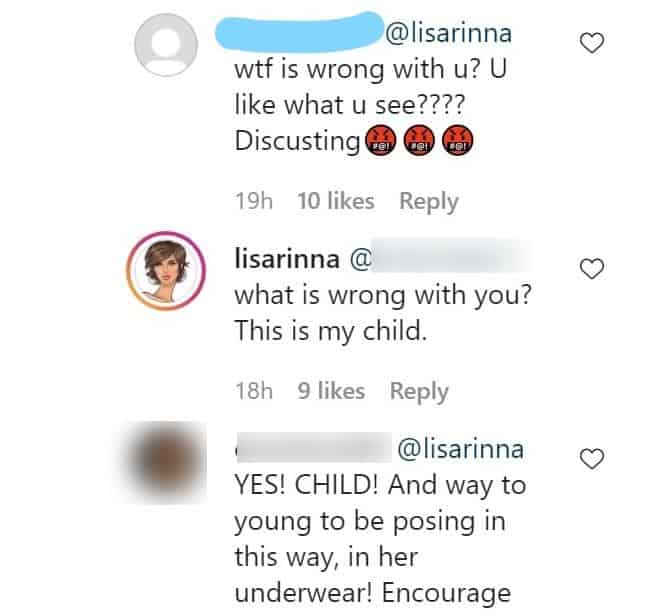 Fans immediately began to chime in with their own opinions, but the feelings were mixed.

“YES! CHILD! And way [too] young to be posing in this way, in her underwear! Encourage her to go to college, not this,” one fan suggested.

“Are you serious,” another questioned the reality star. “She needs college and [to] do something other than [p*ssing] in [Scott Disick‘s] bathroom! [Disgusting]!”

“This is nothing more than jealousy and envy. People who are not on the level of you and your family could not possibly understand,” a third fan wrote.

“Women dragging other women down, what happened to female empowerment? She looks amazing,” another declared.

Lisa has also received backlash for seemingly approving of Amelia’s relationship with Scott, 37, of Keeping Up With the Kardashians fame. The pair have reportedly been dating since Halloween of last year and appear to still be going strong.

After reports surfaced claiming Lisa was “disgusted” by the relationship, the star shut those allegations down as her rep explained that Lisa fully supports her daughter.