Months after the 38-year-old opened up about plans to expand her family and discussed a number of topics pertaining to the two seasons she spent on Shahs of Sunset, including the one thing that nearly stopped her from joining the Bravo reality series, Lilly took to her Instagram page to share her exciting news.

In a January 14 post, which included a slideshow of family photos with Dara, 41, and their daughter, 3-year-old Alara, Lilly told her fans and followers on Instagram that she had been “been busy creating life.”

“Surprise!!!! Sorry I’ve been so MIA. It’s been a hard few months this pregnancy. Thrilled to be expecting our next baby and finally feeling better,” she said in a series of posts. 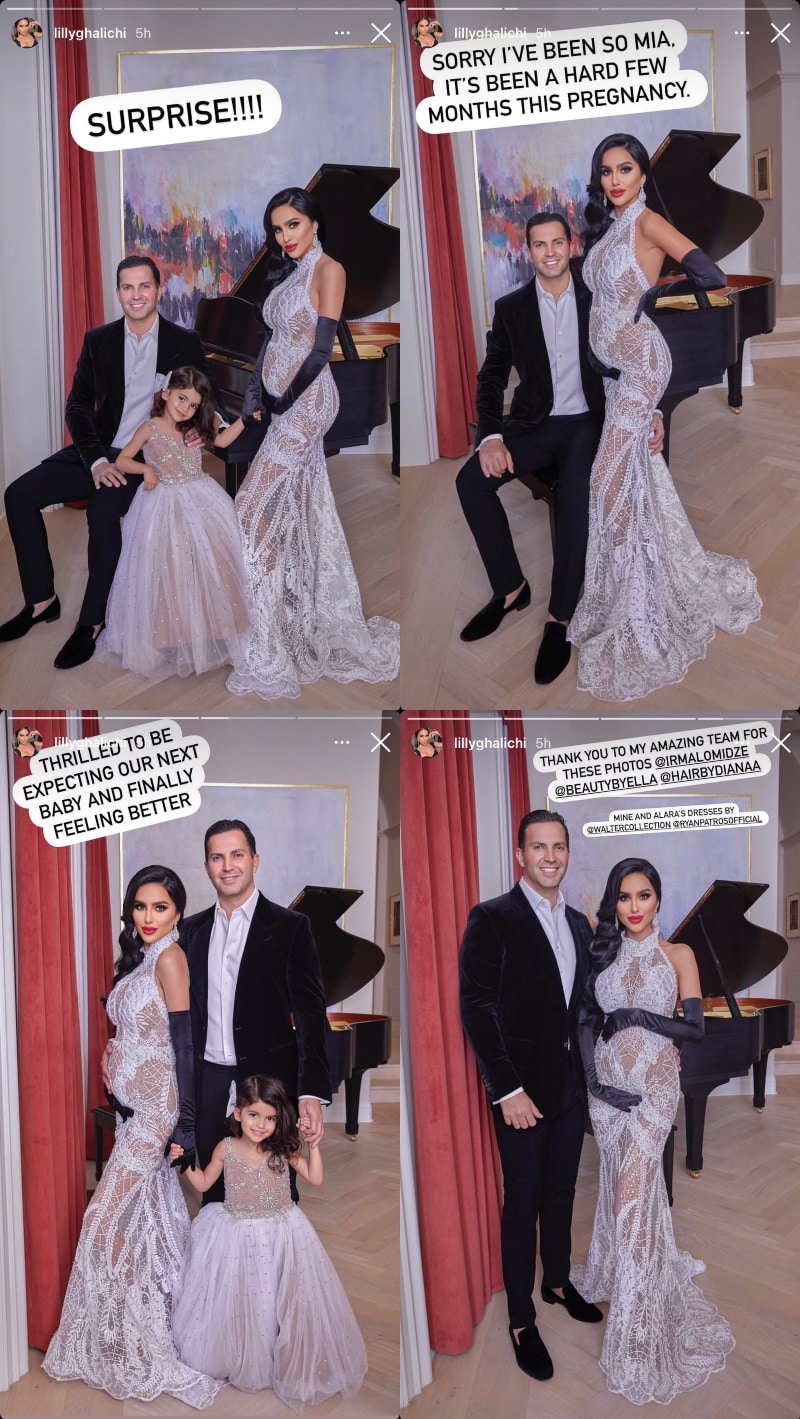 Lilly joined Shahs amid their second season in 2012. But she did so with one major hesitation.

“I come from a different family upbringing than the rest of them,” Lilly revealed on the latest episode of Life After Bravo. “My family was very strict. There was no alcohol in the house, and I’m watching these people partying and thinking, ‘What are my parents going to think?’ That was my biggest hesitation, how my family would take the news.”

So, how did her family take the news? As Lilly explained, her dad was immediately upset.

“I told my dad, and I’ll never forget he stood up, he was bright red, and he just looked at me and he goes, ‘You better not be in a goddamn bikini,’” she recalled, adding that her dad has yet to see a full episode of the show.

Throughout her two seasons on Shahs, Lilly said she “never felt like part of the group.” Instead, she felt as if she was “the kid that moves to a new school and doesn’t have any friends.”

Not helping the case was the fact that Mercedes “MJ” Javid seemed to have a vendetta against her.

“I think she has a little bit of jealousy issues with her friends. She doesn’t want people to be close to the people she’s close to. It’s that mean girl mentality,” Lilly explained, revealing she received a call from MJ just months ago.

“It was two days before GG’s son’s birthday party. I got a call from her. I didn’t answer the call,” she shared.

Since leaving the show, Lilly has gotten married and welcomed her first child with Dara. However, while she has remained active with her fans and followers on social media, Dara prefers to stay out of the spotlight.

“He’s a private person. So it’s difficult. In his dream world, I would delete my Instagram,” she admitted. “[But] I still want more kids. I’m just so tired. She’s turning three next month and my husband’s like [waiting].”

Although Lilly felt like an outsider during her two seasons on Shahs, many have hoped to see her return, especially now that she’s gotten to know her former castmates much better and has real friendships with both Reza Farahan and Golnesa “GG” Gharachedaghi.

“I’m such close friends with some of [them]. GG, our kids play, her daughter gave my son his first kiss [and] I love Reza,” she gushed.

Still, when it comes to the idea of rejoining the show, Lilly had one word: “No.”

“Reza asked me that question very recently. He’s like, ’You’re a mom now. MJ’s a mom now.’ But at the time, he had just had something very traumatic happen to him at his home,” Lilly explained, giving a nod to Tommy Feight‘s retaliatory trespassing that occurred after Reza shared private information about MJ.

“And I was like, ‘No, no. There would be no instance, especially being a parent now, that I think it’s okay to go trespass on someone’s property and destroy things. And I wouldn’t want my daughter exposed to that,’” she added.

Also, during the interview, Lilly said that the best part of being on the show was being able to help break down misconceptions of Persian people and that the worst was having everything she said and did “put under a microscope.”