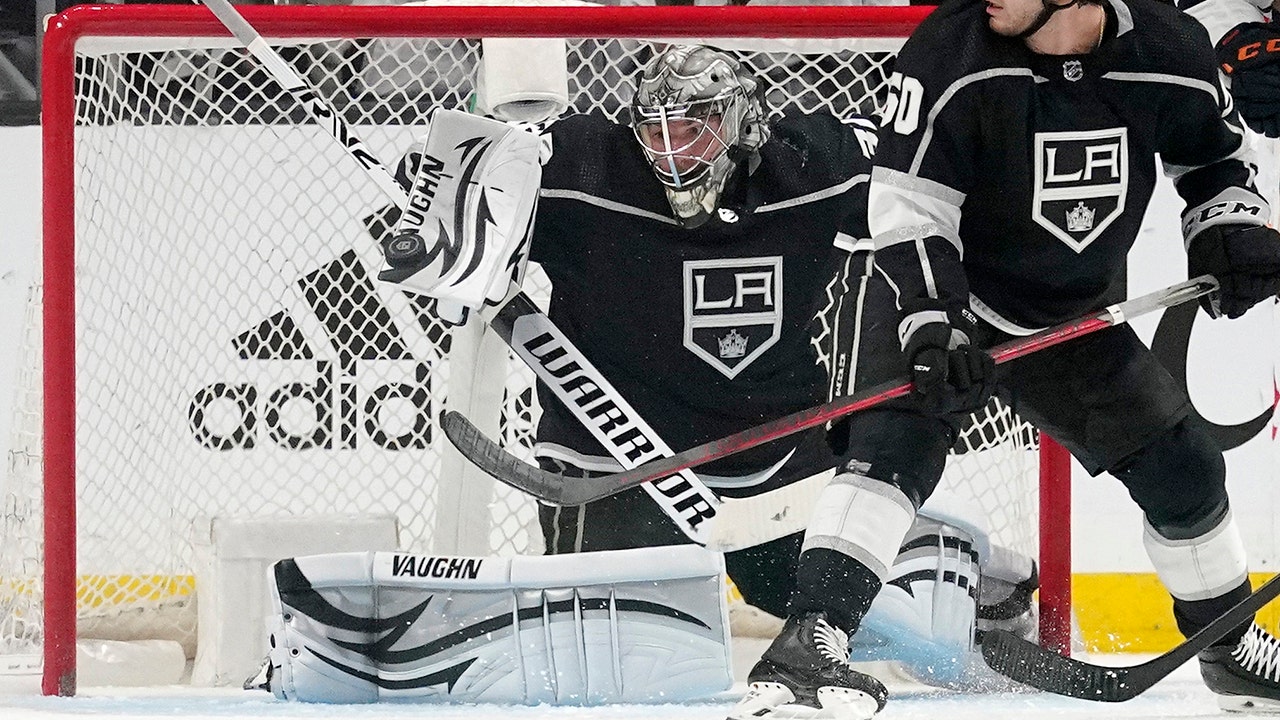 Jonathan Quick lost his catching glove in the second period and still kept defending Los Angeles‘ net, his bare left hand grasping at an Edmonton shot that went off the crossbar.

With the Kings reeling from back-to-back blowout losses and teetering on the brink of a daunting playoff deficit, their Stanley Cup-winning goalie grabbed hold of his teammates and confidently pulled them back into this series with the Oilers.

“If there was ever a night we needed somebody that’s been there and done that, it was tonight,” Kings coach Todd McLellan said.

Quick made 31 saves with and without his glove during a masterful performance, Carl Grundstrom scored two third-period goals and the Kings rebounded to even their first-round series with a 4-0 victory over Edmonton in Game 4 on Sunday night.

After Trevor Moore and Troy Stecher scored in the first period, Quick earned his 10th career playoff shutout while the Kings firmly shut down Connor McDavid and Leon Draisaitl. Los Angeles earned its first playoff victory on home ice since the club raised the Cup for the second time in 2014.

“We played the game that got us here,” Quick said after his 48th career playoff victory. “We got pucks deep, forechecked, blocked shots, pucks to the net, rebounds. We played the way we’ve been successful.”

Mike Smith stopped 42 shots for the Oilers, but McDavid, Draisaitl and Evander Kane all struggled for consistent scoring chances after two games of dominance — and much of the credit should be directed to Quick, who got chased during Edmonton’s eight-goal avalanche in Game 3.

He returned to play flawlessly behind a patchwork LA blue line missing stalwarts Drew Doughty and Sean Walker due to injuries.

Edmonton’s frustrations and Los Angeles’ exuberance led to several stoppages and near-brawls in the final minutes. The bad feelings were set off when Grundstrom scored his first career playoff goal while sliding headfirst into Smith and the goalpost with 4:54 to play. Grundstrom added an empty-net goal with 1:31 left.

Game 5 is Tuesday night in Edmonton, with Game 6 back in Los Angeles on Thursday.

After getting humiliated by a combined 14-2 in the previous two games, the Kings again looked like the playoff-worthy team that won Game 1 in Edmonton. The Kings improved on faceoffs and on special teams, killing all three Oilers power plays after giving up five power-play goals and a short-handed goal in the first three games.

“We know they are going to respond, and we’re losing puck battles early and letting them get to our net a little too easy,” Edmonton center Ryan Nugent-Hopkins said. “They put pucks on net and they worked, and we didn’t respond well enough. And that’s a tough team to come back on.”

Edmonton only got rolling late in the second period, but its best chances were repelled by Quick, the idiosyncratic goalie with two rings and ample postseason poise.

Moments after Quick lost his glove and still tried to make a save with his bare hand, he stopped a point-blank chance with an instinctive flick of his blocker. McLellan wondered why the game wasn’t stopped for the lost glove, but he didn’t wonder why Quick kept playing.

Quick shrugged when asked about his unorthodox brilliance.

“You just see the puck, try and get something in front of it,” he said.

McDavid was active in the third period, yet he also took an ill-advised interference penalty next to the Kings’ goal with 9:40 to play.

The Kings retained their defensive discipline for most of the third before Grundstrom muscled in his first career playoff goal while getting taken down roughly by defenseman Darnell Nurse. Edmonton challenged the ruling, but lost.

“They came and pushed, and we didn’t push back hard enough,” Nurse said. “And that’s how you get the lead there. We played into their style of play. … It’s a good team that weren’t just going to roll over and let us come steal another game in their building.”

The Kings took their first lead since Game 1 when Moore converted a slick pass from Phillip Danault midway through the first period for his second goal of the series. Moore, a Southern California native, got his only previous playoff experience in 2019 with Toronto.

During 4-on-4 play later in the first, Stecher’s shot from above the faceoff circle deflected off Duncan Keith’s stick blade and went in for the depth defenseman’s first goal for the Kings.

Stecher, acquired from Detroit in February, played his first postseason game for LA in place of the scratched Jordan Spence.

Edmonton forward Derek Ryan sat out after getting in an awkward collision late in Game 3. Journeyman Derick Brassard took his lineup spot, making a playoff appearance for his sixth NHL team.