Kenya Moore and Marc Daly are still going through a very public split on The Real Housewives of Atlanta.

In a recent episode, Kenya Moore found out that the restaurant owner filed for divorce and was requesting alimony. 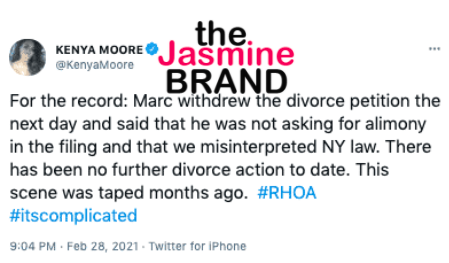 Now, she’s explaining why they never met one another’s parents before tying the knot in the summer of 2017.

While on Bravo’s Watch What Happens Live, she was asked if now sees not meeting her future in-laws as  “red flag.”

“Not immediately. Because he didn’t meet my family either until much later when my grandmother passed [in July 2017]. And his family lives in another state, so you know, it happens when you have family that live all over.”

She also spoke on Marc Daly’s relationship with his parents last April and said,

“Yeah, I met them before. They came to my baby shower. We were in communication then. I just think that whatever happened in that relationship is between them. I get answers, but the answers that I get don’t quite make any sense — and, so it’s like, could he be able to pick up the phone and call my mother? That’s how he looks at it.”

“But he has his own issues that he needs to work out, and I just don’t get in the middle of it.”

She said on an episode of RHOA last season:

“It’s always been this block up with him not letting me completely into his life. It’s just, a lot of things I felt like I was in the dark about…It kind of feels as though there’s a large part of him, or the relationship, that I was just never privy to. For example, I’m not allowed to speak to his mother or father. And if you don’t know everything about that person’s life, you’re not being let in.”

What are your thoughts on Kenya Moore not meeting Marc Daly’s family before tying the knot? Comment and let us know.

Olivia Jade Says Cancel Culture Has Made Her “Walk on Eggshells”