Kelly Dodd seemingly clapped back at Veronica Leventhal, the adult daughter of her new husband, Rick Leventhal, in a tweet shared over the weekend.

After Veronica shared a telling post about racism and ethnicity, in which she appeared to call out the Real Housewives of Orange County star for her past comments about the issues, Kelly shared a message with her fans and followers in which she poked fun at Veronica’s “stupid tattoo.”

“We are selling the West Hamptons house!! It goes on the market next week!! Someone who got a stupid tattoo of a tree on their back should probably get tattoo laser removal ASAP!! Jolie this is why you don’t mark up your body with idiotic signs!” Kelly wrote in her tweet, which was shared by the LoveAndyC fan page on Twitter. 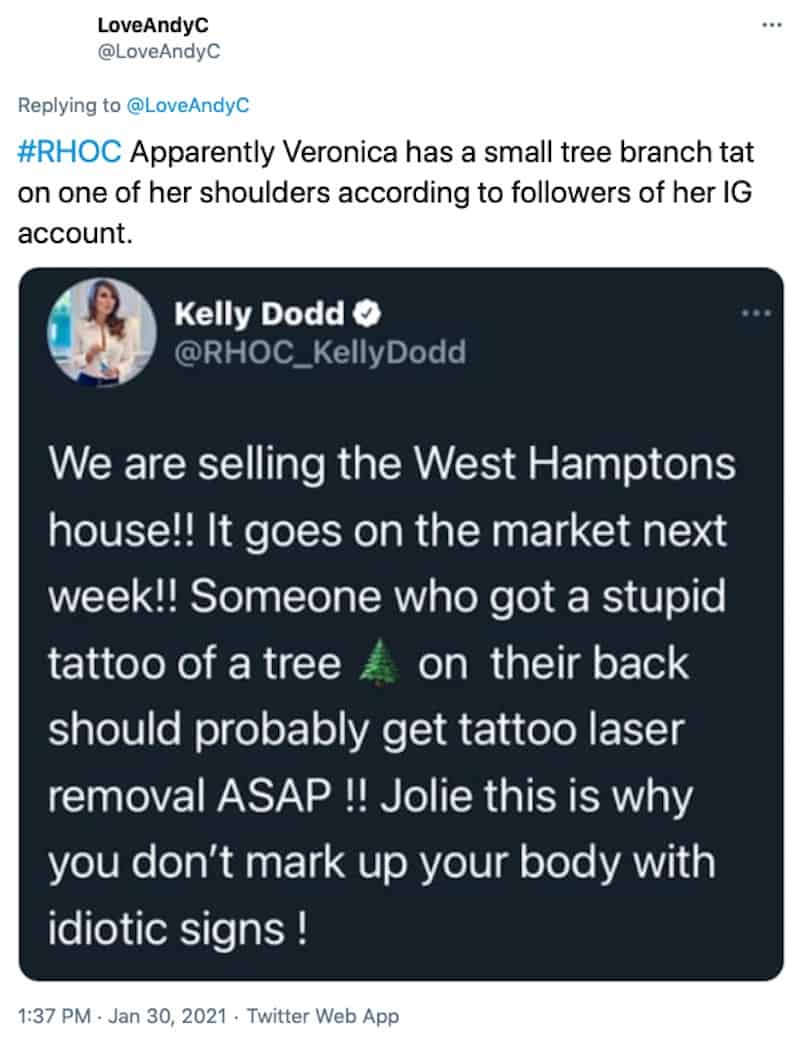 Following the sharing of the tweet, a number of fans weighed in on the drama, one of whom suspected Veronica had gotten her tattoo in an effort to honor the time she had potentially spent at Rick’s West Hamptons home.

“I wonder if the tattoo has some type of significance related to the Hamptons house, which is why she suggested removal in the same post about selling. Which would mean the house was important to the child in some way, making this situation even more disturbing,” the person shared, adding that they were “purely speculating.”

“Kelly Dodd has got to be the step mom from hell. The step daughter looks young enough to wait this marriage out, and eventually [be] able to wag her finger at her dad with an ‘I told you so,’” another person added.

In a video shared to her Instagram Stories at the end of last week, Veronica slammed someone she didn’t name for claiming to be a certain race in an effort to defend themselves from allegations of potential racism.

“I don’t think it’s okay for people who say that they’ve experienced racism or prejudice to then turn around and inflict that same bigotry on other people. I don’t think you can experience the privileges of whiteness and then turn around and deny that those privileges exist,” Veronica began in the clip, which was also shared on Twitter by LoveAndyC.

“I don’t think that you can claim ownership on a culture or a nationality and then disallow privileges to those people, either through certain political perspectives or just subjugating them in other ways. And I don’t think you can use your personal multiculturalism as a shield for people saying that you have biases,” Veronica continued.

“And finally, if you are going to make arguments about racism, then you should have a basic understanding of the difference between race, ethnicity, and nationality,” she added.

Prior to the post, Kelly had proclaimed, “I’m black” at the RHOC reunion, and she had previously said she’s “experienced racism” as a “woman of color.”