EXCLUSIVE: Mathew Knowles On Experiencing Racism As A Child ‘I’ve Been Spit On’ + Clarifies Reports He’s Leaving Music Industry, Reveals Destiny’s Child Musical Is Back On

EXCLUSIVE: Mathew Knowles On Experiencing Racism As A Child ‘I’ve Been Spit On’ + Clarifies Reports He’s Leaving Music Industry, Reveals Destiny’s Child Musical Is Back On

In an exclusive interview with theJasmineBRAND, business and music mogul Mathew Knowles opened up about his podcast, what it was like growing up in Alabama, and reflects on how his two daughters, Beyoncé and Solange, were raised. Many people know Mathew Knowles for being a mastermind and former manager for the group Destiny’s Child. In addition to his work in the music world, he was also one of the executive producers of the 2009 movie Obsessed, which stars his oldest daughter Beyoncé.

Mathew Knowles recently sat down for a virtual chat with theJasmineBRAND and shared with us details on his latest podcast project. According to Mathew, his podcast will center around discussing racism, health and wellness, entrepreneurship, and the music business. When speaking on racism within America he said,

“When we look at the first one, structural racism, that exists in America and I call it structural racism versus systemic because when you build a house you have to start with the foundation and then you put the electrical systems [and] the alarm system in. But you don’t start a house by putting the alarm system and the electrical system in. You build a foundation. Unfortunately, the foundation of America is slavery. [It’s] what it was built on.”

It seems that a huge inspiration for Mathew’s podcast was his own upbringing. He was born in 1952 and raised in Gadsden, Alabama. During his conversation with us, he opened up about some of the racism he experienced while growing up as a black man in America.

“I’m one of the first to desegregate junior high school, high school, elementary, [and] the University of Tennessee at Chattanooga. I’ve been spit on. I’ve been electric-prided. That’s like a billy club, it has these three prongs – that’s what they hit cattle with. They used to hit us with it and I was young. I was 12, 13 years old when we were marching and demonstrating.”

“Many of the viewers today have no idea what a colored water fountain looks like or going to a colored restaurant’s restroom and not being able to go to a Target [or] a Walmart.”

“We couldn’t do those things. So we take our freedom that we have, we take it for granted because we don’t really know.”

There’s been a few rumors floating around that Mathew Knowles plans to retire from the music industry soon. He took the time to clear up speculation exclusively for theJasmineBRAND. He said,

“No, I’m not [retiring] in a couple of years. I’m phasing out [and] phasing into film and TV. We have a number of film and TV projects that’s new. Destiny’s Child: The Untold Story, my story, the emancipation of slaves through music.”

He continued and said he had to pause production on the Destiny’s Child musical because of the coronavirus pandemic.

“You know, the coronavirus…we were working on the Destiny’s Child Broadway musical. We had to set that obviously on hold for a year. But we are working back with a new team for that.”

Mathew Knowles is a man that wears many different hats. However, his focus with his now-adult children is about being a dad.

In addition to speaking about his role as a father, Mathew talked about his own physical health as well. The 69-year-old businessman beat cancer and shared with us what it was like overcoming that hurdle.

“I look at all of my adversity because adversity is an opportunity to grow not a reason to quit. And often we think ‘no bad stuff is gonna happen’ [but] that’s how we grow. That’s how we change, modify, and, alter our behavior.”

He continued and said,

“So I don’t look back in the rearview mirror. Those things were meant to happen. They were meant for my growth [and were] my opportunity to change. And that’s how I look at life.”

Mathew then shared with us how he’s been doing mentally since the start of the pandemic.

“In the beginning of COVID I was having anxiety attacks and I was, you know, I didn’t want anybody to be around me. I didn’t want my wife to go outside the apartment here in Houston. And that was just, you know, it’s too much and so I called [my therapist] and I said ‘I don’t know what’s going on.’ He said ‘Whatever you bring to [a] crisis it’s multiplied times 25.’ So if you bring anger with a partner then it’s 25 times the anger now. That’s why a lot of relationships went bad through this. Because they had already had these challenges and problems with their relationship.”

“[My]work was [that] I had not come to grips with my cancer and I had this fear of dying that I didn’t want to face. And so [my therapist] helped me walk through that through this COVID.”

Towards the end of the interview, Knowles filled us in on what it was like for Beyoncé and Solange to grow up with accomplished black parents.

“We had the cool cars. We had the cool house so we were grateful and blessed for that. Beyoncé and Solange, they grew up in a… not the typical environment of music artists. I say that with gratitude not with any arrogance. So they grew up in a different environment than most financially and knowledge and spirituality. All those things were very, very important in their childhood.”

He continued and shared that his goal for his family, including his ex-wife Tina Knowles, was for them to pursue whatever made them happy. He said,

“The day that Tina said, you know, she didn’t want to be a stay-home mother anymore and I said ‘What is your passion?’ She said ‘I love the beauty industry. I love fashion.’ I said ‘Go get your cosmetology license and we’ll open a hair salon.’ Same thing about clothing, we’ll start a clothing line House of Deréon.” 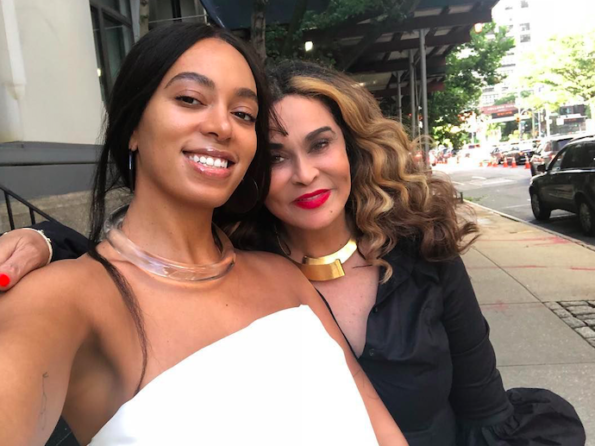 Before our time with Mathew Knowles came to an end he shared with us his three crucial tips for being a successful entrepreneur.

“…I keep this very simple. It’s the who, the what, the why. Who is my customer? What is my product? And why should they buy it?

“If you’re going just into life in general then my advice would be, remember that people buy you first [and] your product second.”

What are your thoughts on what Mathew Knowles exclusively shared with theJasmineBRAND? Let us know in the comments below.

Blake Moynes and I Were ‘Winging’ It Before Split