The girlfriend of Elizabeth Vargas‘ ex-husband, Bernt Bodal, confirms she and Bernt are engaged as she claims they have sent Elizabeth multiple cease and desist letters and accuses the star of harassment.

Elizabeth seemed completely caught off-guard when Braunwyn Windham-Burke claimed Bernt was engaged during part one of The Real Housewives of Orange County reunion. Braunwyn explained that she has a close friend in common with Elizabeth’s ex and his new girlfriend, Michelle Fox, and she alleged the couple had confirmed their engagement to her friend over the phone.

“Well, they’re not engaged, first off, or I would know,” Elizabeth responded to Braunwyn on the reunion.

Once the episode aired and questions about the engagement began to circulate,  a “frustrated” Michelle took to the Instagram comments section of an RHOC recap story and began to explain her side. She later spoke with Page Six.

“We have been through a lot with her and it’s none of her business,” Michelle said of Elizabeth. “She needs to move on and stop contacting Bernt and talking about him. We tried to take the legal action to make a point — that was why I got upset on comments and it’s not fair we have to see this stuff — it’s disgusting behavior.”

In one Instagram comment, she explained that she and Bernt have been together for years and are “secure” in their relationship.

“I am standing up for Bernt who is the love of my life and we are both secure in our relationship for years now,” Michelle wrote. “We both just want her to get a life and go away — that is why I said anything.”

As fans know, Elizabeth has spent a great deal of time discussing her divorce and former husband on the show, and she even admitted to her co-stars at one point that she still speaks with Bernt and lets him know she misses him.

After confirming that she and Bernt are in fact engaged, Michelle says she has seen the many messages and calls from Elizabeth and “[they] just delete them.” She went on to explain that she and Bernt are very upset with Elizabeth for speaking about them publicly, and she claims they have sent her a cease and desist letter on more than one occasion.

“You absolutely can have a C&D if they are out in the news saying highly defamatory comments that are not true about him – that is not how to ‘grieve,’” she explained. “She can focus on her ‘cult’ storyline instead.” 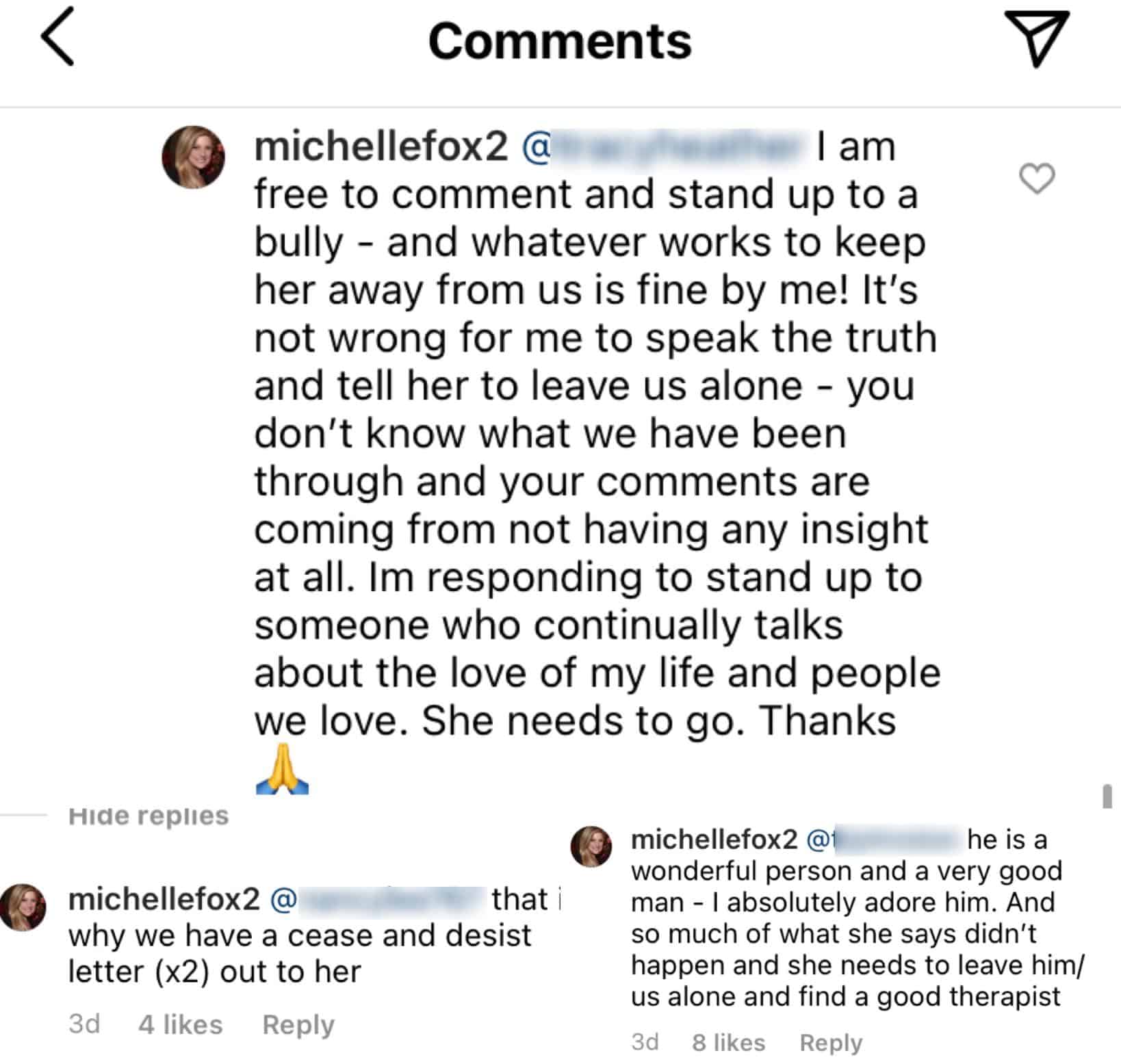 Elizabeth has made claims about the Norwegian businessman outside of the show as well, including alleging that Bernt was still married when she began a relationship with him. The reality star also alleged that she felt obligated to participate in threeways with her ex-husband.

Although Michelle, who is the co-founder of Rock Your Business, has confirmed she is Bernt’s fiancée after being spotted with a ring on her left land, it appears Elizabeth is still not buying it.

“I have confirmed with my ex-husband that he is not engaged,” she claimed when asked to comment on Michelle’s allegations.

“I am uncertain who this particular Michelle is on a personal level,” Elizabeth added. “However, it is my understanding that she is in somewhat of a relationship at some capacity with my ex-husband. Unfortunately, in today’s day and age there’s a lot of negativity going around in the world, and I feel she is caught up in it along with a lot of other individuals. However, she is not involved in my life in any capacity and never will be.”

Elizabeth says Michelle is only speaking out because she’s jealous, but she “wishes her well.”

“Women come after me all the time, and this is another clear example of another jealous woman coming after me, and it’s not my problem. I’m sorry she feels that way. I wish her well.”