After coming across an article in which The Real Housewives of Orange County cast member claimed to have sent her and David a baby gift for their daughter, Anna, who they welcomed last month, Lesley called Shannon out for sharing “another fake story.”

In a screenshot shared by Jane Herz on Twitter, Lesley reacted to an Us Weekly article by suggesting Shannon has been dishonest.

“Another fake story. This didn’t happen. Please just let us be,” she wrote. 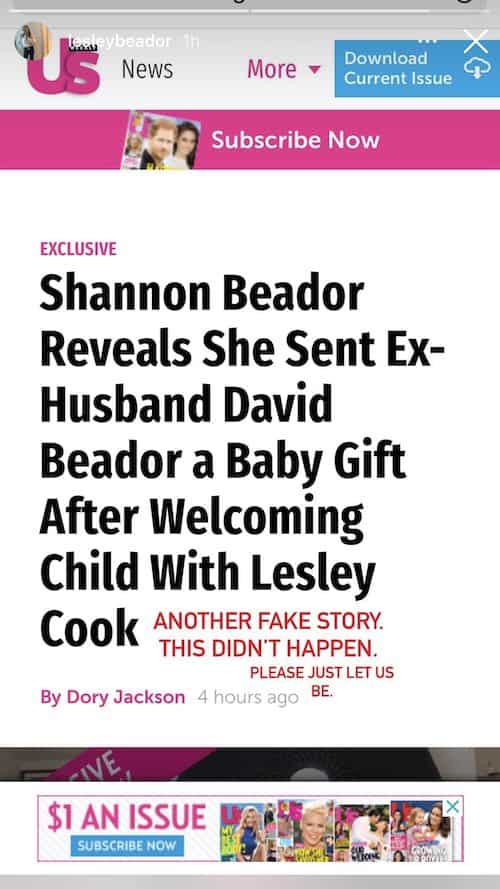 David and Lesley welcomed their daughter Anna in February, just four months after tying the knot.

As RHOC fans may recall, David began dating Lesley just months after he and Shannon ended their 17-year marriage, and in January 2020, the couple announced their engagement.

During an episode of Jeff Lewis Live in October 2020, Shannon admitted that she’d never met Lesley before discussing her “awkward” co-parenting relationship with David.

“You know, I wish he and his future wife the best but I just wish that I had more of a co-parent,” Shannon admitted. “He will not respond to my texts and if he does send me some email or text because I need it and then I respond, he’s like, ‘No need to respond.’ [It’s been one-sided] for a long time.”

While speaking to Us Weekly last week, Shannon had told the outlet she “sent a gift” to David and Lesley before admitting that she was unsure if they’d actually received it.