While the COVID-19 vaccine is a hot commodity for millions of people, former NBA star Charles Barkley said he wants professional athletes to be first in line to receive it.

Charles Barkley offered up his own suggestion while hosting NBA on TNT Thursday, Jan. 15th.

Charles Barkley says NBA/NFL players should jump the line and get vaccine shots because they pay more taxes than normal people pic.twitter.com/ce5y1WTTOk

Meanwhile, NBA Commissioner Adam Silver has already reportedly said teams “would not jump the line” get vaccines early. He said, according to ESPN:

“It goes without saying that in no form or way will we jump the line. We will wait our turn to get the vaccine. When you think about the logistical feat that now the federal and state governments are undertaking, where if every citizen ultimately requires two doses and with a population of over 300 million, it’s beyond comprehension when you start to begin to think about the logistical challenges of transporting and distributing this vaccine.”

Charles Barkley didn’t get much support on Twitter either as his name trended.

Charles Barkley giving his take on NBA players jumping to the front of the line to get a COVID vaccine pic.twitter.com/XUkCrfvP4D

Charles Barkley really just said that the NBA players need to be moved to the front of the line for the vaccine because they pay taxes and give money to charity??? pic.twitter.com/X7yNs6NhC5 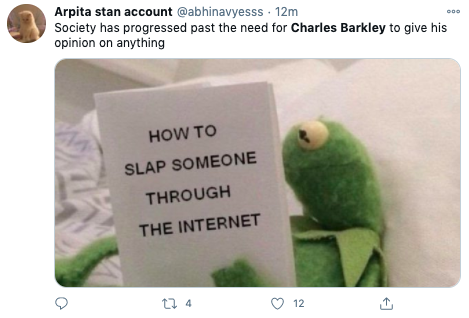 Do you agree with Charles Barkley? Comment and let us know.