Caroline Rauseo Confirms RHONJ Role as Margaret Shades Her, Plus She Teases Fights and “Explosive” Season


Caroline Rauseo confirmed her role on The Real Housewives of New Jersey while attending Jennifer Aydin’s Charity Masquerade Ball at 46 Lounge in New Jersey on Wednesday with castmate Dolores Catania.

Five months after rumors of her possible addition to the cast first began swirling, the 49-year-old friend of longtime star Teresa Giudice said filming was “exciting” before teasing drama with one of her co-stars and confirming fans are in for a “very explosive” 12th season.

“I have been friends with Teresa for over 25 years. I met Jennifer and Dolores through Teresa and we’re really close. We have established a friendship,” Caroline revealed to The Sun. “I can’t say who I fought with right now, but if you watch this season is very explosive. There are a lot of exciting moments.”

Rumors of Caroline’s addition first began in June when she was seen in social media posts with Teresa, Jennifer, and Dolores. Then, weeks later, RHONJ fans learned that Traci Lynn Johnson, wife of former NFL player Tiki Barber, was also reportedly joining the show for season 12.

“Tiki Barber’s wife Traci Lynn filmed with the cast at Margaret Josephs‘ Pride party in Englewood, NJ on Tuesday night. The party was shot for season 12, Traci is being tested out to see how she fits in with the other women, she’s been filming scenes,” an insider previously told The Sun.

Also during Wednesday’s event in New Jersey, Jennifer spoke to The Sun about her charity event.

“This is for my brother’s non-profit musical theatre organization Long Island Musical Theater Festival. It’s a non-profit where basically they mentor students,” she revealed. “It’s tuition-based funding and it’s not always enough to sustain putting on the shows. They need donations. The arts are dying. We need to draw attention to it. Tonight is just about having a good time and raising money and hopefully they can just donate.”

Following the interview, Margaret reacted to Caroline’s addition to the RHONJ cast on Instagram.

After RHONJ Obsessed shared a snippet from The Sun’s article, Margaret asked, “What franchise?” 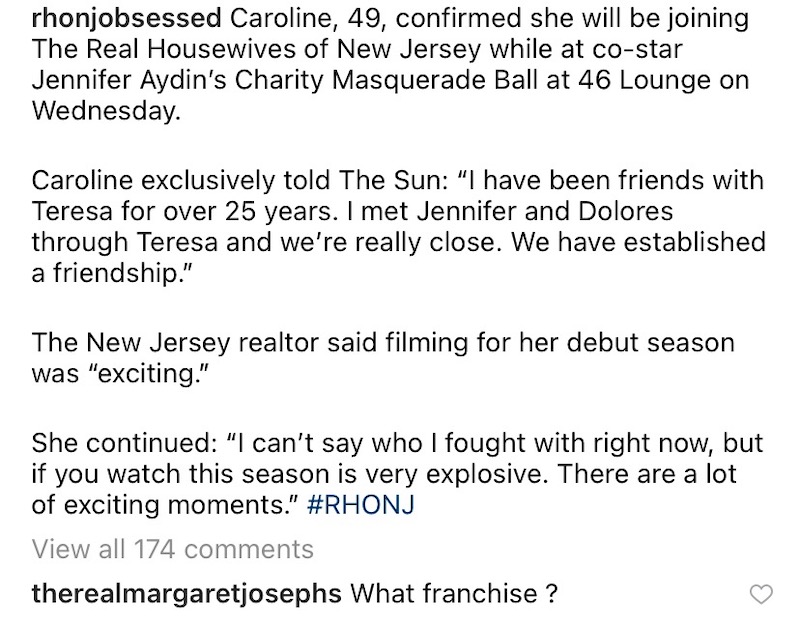 While Margaret failed to share any further information about Caroline, her Instagram shade seems to suggest that she didn’t film much or at all with Caroline, which would mean Teresa’s friend will only be featured in cameos or a part-time position.

The Real Housewives of New Jersey season 12 is expected to premiere on Bravo sometime in early 2022.

Nicholas Braun Steps Out for the Knicks Game with His Mom in NYC!