As filming continues on the upcoming 11th season with the returning ladies of the show, as well as new cast members Crystal Kung Minkoff and Kathy Hilton, Camille shaded her ex-co-stars as hypocrites while admitting that her last scene with the women was “frustrating.”

“Are some of the Housewives hypocrites??? Nah,” Camille sarcastically tweeted on February 10, along with a series of laughing emoji.

“Makes for good tv but not good friends! Lol,” one fan wrote in response. 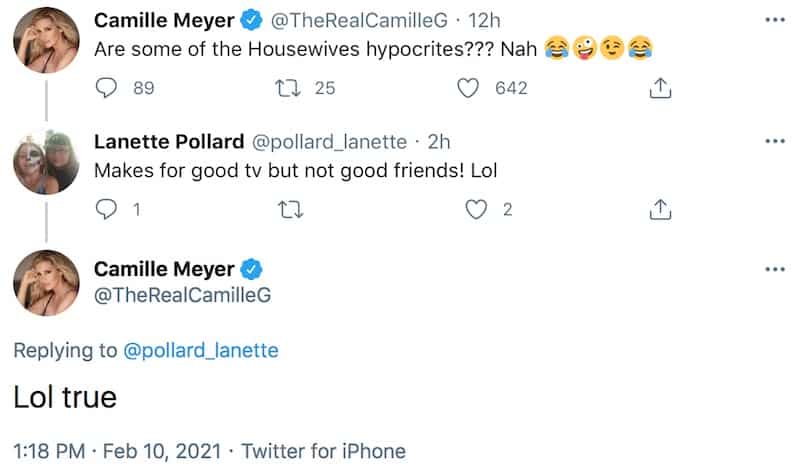 Another fan wanted to know how Camille felt about her own behavior on past seasons of RHOBH.

“How about you?” the man asked, along with a rolling eyes emoji.

“I’m sure I have been at times but not often,” Camille admitted.

Then, after Camille said that Dorit Kemsley‘s ever-evolving look could be nothing more than crafty makeup, as she suggested at the RHOBH reunion, someone else pointed out that there was a ton of “bs” in the room that “probably made [Camille] crazy.”

“It was frustrating,” Camille confirmed of what ended up being her final scene of the show. 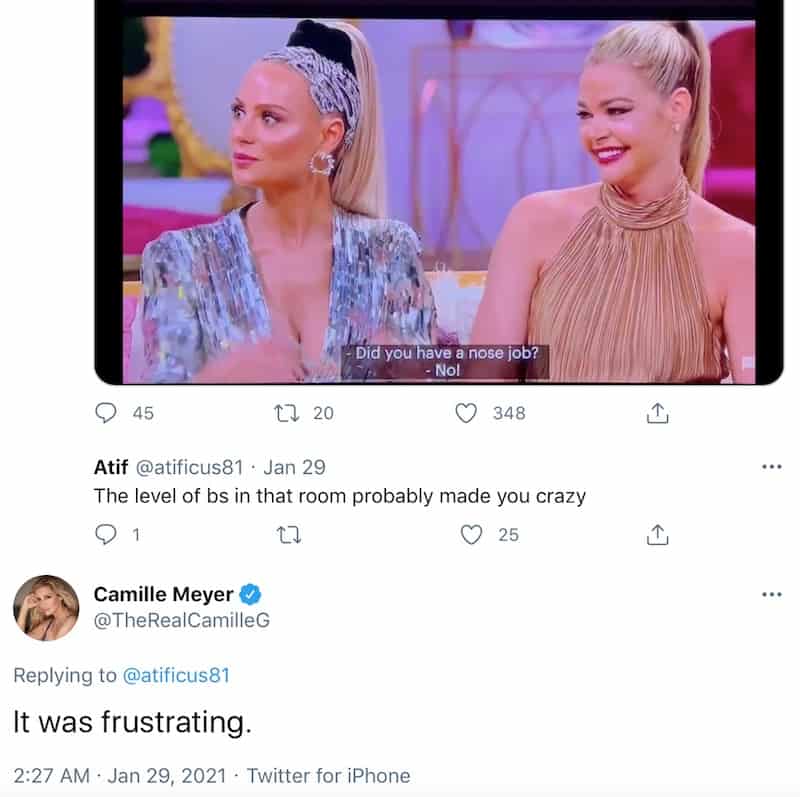 In a fourth tweet, Camille spoke about a potentially upcoming podcast or video blog about the upcoming season of RHOBH.

“Hoping for a [Camille Grammer] pod or vlog during next season’s [RHOBH],” a Twitter user wrote.

As RHOBH fans may know, this isn’t the first time Camille has taken aim at her cast mates’ hypocritical behavior.

Less than a year ago, Camille targeted Lisa Rinna in a re-tweet for demanding Denise Richards share everything on the show after protecting Dorit the previous season.

“Dear [Lisa Rinna] you are a f*cking hypocrite .. y’all protected Dorit last season when Camille brought all her skeletons on the table .. and suddenly Denise signed up for the show & have to talk about everything,” her re-tweet read.

Months later, Camille called out Lisa again for outing Denise over her failure to show up to Dorit’s finale event during filming on season 10.

The Real Housewives of Beverly Hills season 11 is expected to air on Bravo sometime this spring.