Brandi Glanville insinuates that she’s turned on by actor Armie Hammer‘s alleged cannibalistic fetishes, but later claims it was a “joke” after receiving a great deal of backlash.

The Real Housewives of Beverly Hills alum is known for being rather outspoken and has been blasted at times for making controversial statements or tweeting provocative things, but her latest tweet might just take the cake.

Armie Hammer, who has starred in movies such as The Social Network and Call Me By Your Name, has been making headlines lately for all the wrong reasons. Several women have come forward and alleged that the actor is not only emotionally abusive, but they had graphic sexual experiences with him as he expressed some deviant desires. An ex-girlfriend of Armie’s has claimed that he told her he wanted to break one of her ribs, barbeque it, and eat it.

Brandi took to Twitter Sunday night to weigh in on the scandal, but she doesn’t appear to be too bothered by the allegations.

“Dear [Armie Hammer] you can have my rib cage[.] How do you just keep getting hotter and hotter,” she tweeted, adding a “lets BBQ” hashtag.

Fans immediately began to react to her shocking statement and some even begged the former reality star to delete the tweet.

“This tweet is deplorable,” another fan declared. “There are very serious abuse allegations against this person. You are mocking these and all victims. I’ve always had compassion and empathy for you even when your [behavior] didn’t always warrant. This has gone too far.”

A third person commented, “Mother of two teenage boys… lovely. She wrote a whole book entitled Drinking and Tweeting: And Other Brandi Blunders[,] she should take her own advice for once. Either way she’s too old for his taste.”

“Brandi it’s not too late to delete this tweet,” a fourth fan insisted, but they later added, “Now it’s too late!”

After racking up more than 500 responses to her tweet, mostly negative, Brandi decided against taking the advice of fans and is sticking with her “Twitter fingers” and refusing to “take it back.” She says she’ll keep her rig cage and offers Armie an organ instead.

“I’m not sorry[,] I don’t take it back[,] it was a f*cking joke[.] Clearly I need my rib cage but maybe he can have one my kidneys,” she wrote in the now deleted tweet, adding, “Get some hobbies.” 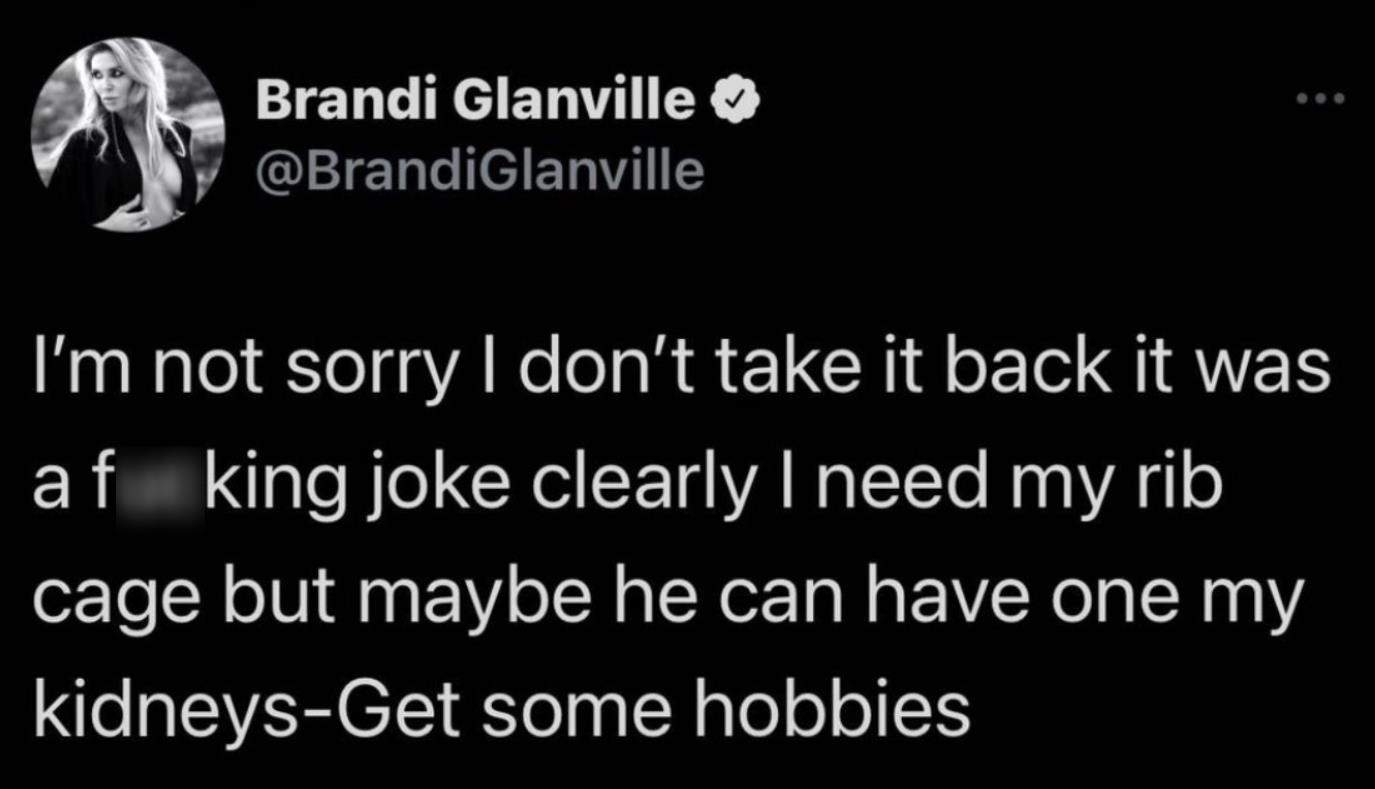 It should be mentioned that Armie has denied all of the allegations despite being dropped by his agency and several movie projects.

“These assertions about Mr. Hammer are patently untrue,” a rep for the father-of-two told Page Six. “Any interactions with this person, or any partner of his, were completely consensual in that they were fully discussed, agreed upon, and mutually participatory. The stories being perpetuated in the media are a misguided attempt to present a one-sided narrative with the goal of tarnishing Mr. Hammer’s reputation, and communications from the individuals involved prove that.”

Brandi’s tweet comes after rumors were swirling that RHOBH star Erika Jayne slid into Armie’s DMs once she realized they’re neighbors and attempted to pursue him romantically. Nonetheless, these rumors have not been verified.